Postal services are experiencing extremely long delays during Covid restrictions. Lautapelit.fi has decided not to offer those services to most countries for time being. For most destinations, this leaves only DHL services which are fully trackable and can be expected to keep promised delivery times better.
We realize this policy may result in regratably high shipping costs to some areas and we apologize the inconvenience. Postal services return as soon as the restrictions are lifted. 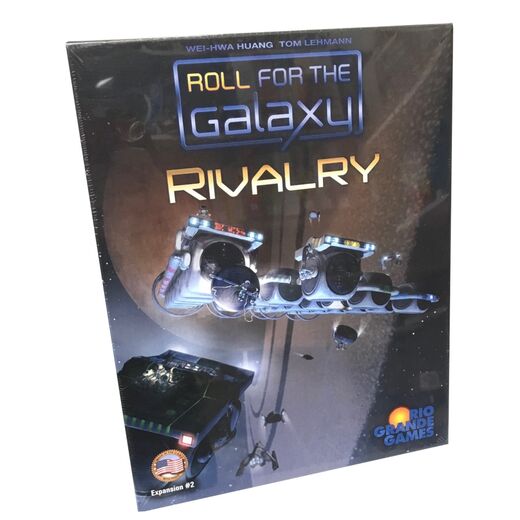 Roll for the Galaxy: Rivalry

Roll for the Galaxy: Rivalry

Availability
Temporarily out of stock

Rivalry is the second expansion for Roll for the Galaxy (ENG) .

But, actually, Rivalry is three expansions in one.

In the Deal Game, there is a new Deal phase to which dice with $ faces can be assigned to, along with any die to choose that phase, plus a reassigned die, and possibly another reassigned die due to the new power that everyone has on their phase slip.

Not using all your credit track? Why not trade in the top part of it to get a useful die? Or, if you're running a large economy and need a credit track that goes to 11 (or even 16), why not trade away a couple of white dice to get a larger track?

Have a bunch of extra tiles clogging up your construction zones from previous Explores? Why not trade them in for new dice? Or, a chance to draw from the bag until you find a 6 cost development? Or a pair of VP chips? Or a talent counter? Or some credits? Or, another Leader die? Or, a chance to draw a world of a desired color from the bag? Or, to turn some Citizenry dice directly into Developers or Settlers? Or...

But, wait, there's more! After you swap some assets, your deal will start to mature over several rounds. If you (or someone else) calls Deal again before your deal expires, then send another dealer in to *reverse* your trade, trading back for what you originally spent and making some credits and talent counters along the way.

Of course, while your deal is maturing, some other player might swoop in and reverse it before you wanted to, taking their cut and converting your attempted temporary loan into a permanent exchange. These things happen...

Net is the dice and the Orb Game, one of Rivalry's two optional challenges.

Second, the Deal dice for the optional Deal Game that I discussed in my first teaser are shown below; they're the 1 black die and 6 white dice.

Third, the Orb Game gives one yellow Alien Orb die to each player, whose faces can be popped out and upgraded to various "lines" of faces that, in turn when rolled, affect what you do in the game.

In the Orb game, you can assign dice to become researchers in the Research phase, similar to how dice are assigned to become dealers in the Deal game.

For each assigned researcher, when someone calls Research, you get two "dots" of upgrades to your dice. The first dot gets you a 1-dot face in any line; extra dots get you better faces in that line. (If you want to switch lines for a given face after entering a line, pay 1 dot more.)

These upgraded dice affect your play. For example, if you rolled the 2-dot beige -1 develop face (lower right corner), it gives you a -1 die discount on all developments you build that turn.

Orb dice are rolled in front of player screens at the start of a round. If you roll a face that grants virtual workers, like the virtual explorer showing on the center yellow die, then everyone knows that you will benefit if Explore occurs and can plan accordingly as they assign their dice and decide what phase to call.

To allow improved Orb dice more opportunities to affect play, the Orb game ends at 15+ tiles or when the initial VP chip pool is exhausted, which is increased to 15 VPs per player.

At game end, each 2-dot and 4-dot face on your Orb die is worth 1 and 2 VPs, respectively. (Players pop out their improved Orb faces with the die tools to count them, which encourages players to restore their Orb dice to its original faces.)

The Deal and Orb games have quite different and contrasting "feels". The Deal Game is more "think-y", with some amazing trades that can be pulled off, while the Orb Game is easier to grasp. 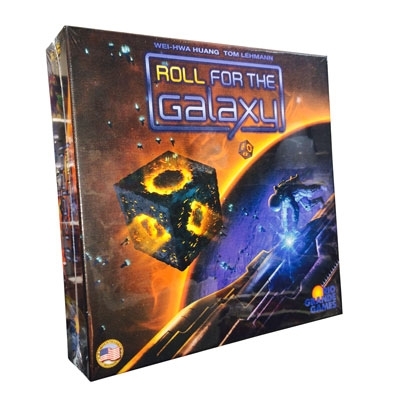 Roll for the Galaxy

Roll for the Galaxy

57,00 €
Copyright © Lautapelit.fi | Powered by MyCashflow - an easy to use web store
Your shopping cart is empty